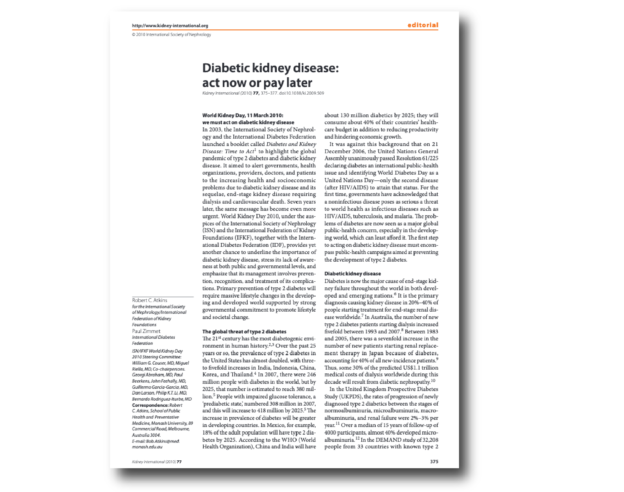 In 2003, the International Society of Nephrology and the International Diabetes Federation launched a booklet called Diabetes and Kidney Disease: Time to Act-to highlight the global pandemic of type 2 diabetes and diabetic kidney disease. It aimed to alert governments, health organizations, providers, doctors, and patients to the increasing health and socioeconomic problems due to diabetic kidney disease and its sequelae, end-stage kidney disease requiring dialysis and cardiovascular death. Seven years later, the same message has become even more urgent. World Kidney Day 2010, under the auspices of the International Society of Nephrology (ISN) and the International Federation of Kidney Foundations (IFKF), together with the International Diabetes Federation (IDF), provides yet another chance to underline the importance of diabetic kidney disease, stress its lack of awareness at both public and governmental levels, and emphasize that its management involves prevention, recognition, and treatment of its complications. Primary prevention of type 2 diabetes will require massive lifestyle changes in the developing and developed world supported by strong governmental commitment to promote lifestyle and societal change.