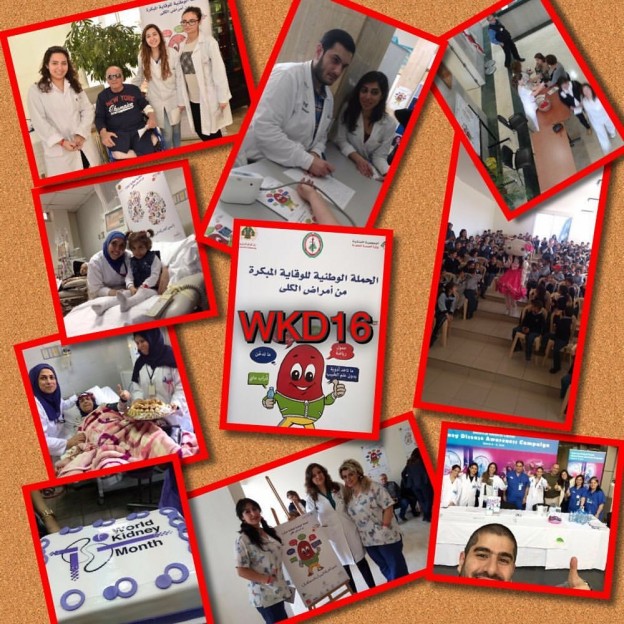 Kidney disease in Lebanon affects around 10 % of de population. Since 2010, the Lebanese Society of Nephrology and Hypertension has been celebrating World Kidney Day in an attempt to reduce kidney disease and encourage prevention.

For the 2016 edition of World Kidney Day, Robert Najem, President of the LSNH, and his team didn’t lack imagination and put great effort into making kidney disease awareness a priority in Lebanon.

Taking inspiration from the 2016 WKD Theme “Kidney Disease and Children: Act early to Prevent It”, they decided to launch a national campaign: “The National Awareness Campaign For Early Prevention Of Kidney Diseases” and focus on early prevention and detection of kidney disease. “Children represent the 25% of our population; if we teach them how important their kidneys are and how to lead a healthy life, we can go a long way in preventing kidney disease”.

The organizing committee – Dr Robert Najem, Dr Mabel Aoun, Dr Pauline Abou Jaoude, Dr Balsam El Ghoul and Dr Rami Ghobril – had the honour to have the support of the Minister of Public Health who declared the month of March as a “Kidney Awareness Month” for the first time in Lebanon!

The campaign included an impressive amount of diverse and creative activities.

LSNH partnered with the Minister of Telecommunications and mobile companies to reach subscribers through SMS. They sent text messages to all mobile subscribers in Lebanon. Around 8 400 000 free SMS were delivered in Arabic and English.

They also reached several TV channels & radio stations with a video clip developed in collaboration with the famous Lebanese actor Amaar Shalak! The video was broadcasted in all local TV and radio stations free of charge.

Moreover, LSNH organised tons of other activities: a Joint Symposium between nurses and nephrologists, a National Medical Tour across Lebanon with GP Doctors and Paediatricians, a Press conference with Sanofi and representatives of important Ministries (Education, Telecommunication, Health) and last but not least, free blood pressure screenings in the main lobbies of more than 70 hospitals in the country.

I talked with Robert Najem about our 2017 theme: “Kidney Disease and Obesity”. He expressed how eager he was to start working on a new campaign. As he said “Obesity is a well-known renal risk factor; this epidemic is widespread worldwide and threatening all people from a very young age, people need to change their lifestyle habits.’’ For this new campaign, the LSNH will collaborate with students in Advertising to design some marketing tools. What a great way to raise awareness of kidney disease amongst the youth!

Want to know more about the Lebanese Society of Nephrology and Hypertension? Check out their website: https://www.lsnh-online.org/