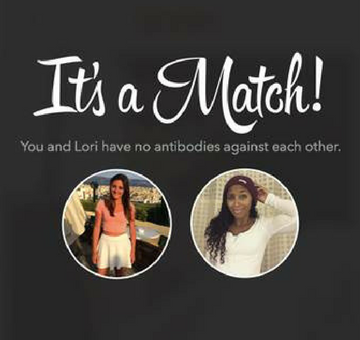 Could you ever imagine that an unexpected online meeting would lead to a brand new kidney and end constant trips to the hospital and numerous doctor’s appointments? Alana Duran and Lori Interlicchio, two ordinary 20 something women from the United States, experienced truly miraculous events in 2015. Lori and Alana share their story with the hopes that it will become an inspiration for others to donate and change lives of somebody in need.

Alana was diagnosed with an autoimmune disease when she was only 12 years old. Her diagnosis was Systemic Lupus Erythematosus (SLE, Lupus); a disease that caused her immune system to attack her own body, destroying organs, including kidneys, in the process. Alana’s kidneys failed in 2011, which left her being dependent on daily dialysis and numerous doctors’ appointments.
Doing peritoneal dialysis at home allowed Alana to minimise time she had to spend in the clinic and instead, she could dialyze at night, while asleep. She had to hook up her dialysis machine each night before going to bed.

Peritoneal dialysis is a treatment for kidney failure that uses the lining of patient’s abdomen, or belly, to filter blood inside patient’s body.

The dialysis solution enters patient’s body through a soft tube, called a catheter, placed by the doctor.

The process of first draining the used dialysis solution and then replacing it with fresh solution is called an exchange. Most people do four to six exchanges every day, or during the night using a machine that moves the fluid in and out. The process goes on continuously, so the patient always has dialysis solution in his/her belly soaking up wastes and extra fluid from his/her body.

While life on dialysis wasn’t that bad for Alana, it has definitely shaped her schedule and posed certain limitations and barriers for the young woman’s lifestyle. The constant juggle of health-related appointments swayed Alana towards meeting people online.

In 2015 Alana met Lori through a popular online app Tinder. The two women shared some great time together and their relationship grew stronger day by day. As soon as Lori found out about Alana’s disease and the need for a kidney transplant, she started concocting a secret plan of donating a kidney to Alana. While Alana was in desperate need of a working kidney, Lori already had two perfectly functioning organs. It was important, but an easy decision to take for Lori; she already knew that kidneys are amazing organs. While kidneys are crucial for survival and your body relies on their functions, it is possible to lead a healthy and active lifestyle with only one (solitary) kidney. One kidney can provide up to 75% of normal kidney function.

Lori stealthily underwent a number of tests to determine whether Alana’s body would accept her kidney. While on a quest to determine whether her kidney would be eligible for Alana, Lori learned a lot about organ donation and spoke to her family in depth about her decision. With the support and encouragement of her family, Lori became determined to help Alana and give her the chance of being independent of the dialysis machine.

The story took a miraculous turn when Lori came up with the idea of a spontaneous present; she got her inspiration from the design of the app they’ve met on. Three months after their first meeting, Lori surprised Alana with a box of presents with the most important one hidden at the very bottom…

Can you already guess what there was? Lori has filmed Alana’s reaction and the video went viral online. Unsuspecting Alana was enjoying Lori’s selection of pampering gifts and did not expect to find an online app styled note offering Alana one of Lori’s kidneys.

Lori was prepared to share her kidney, so Alana and Lori could have a chance in their future life. Lori wanted to emphasize that she did not donate her kidney to Alana only because she loved her, more because Alana needed a kidney and Lori had two.

The two young women have successfully undergone an operation in February 2016. Lori is back to university and is studying law now, while Alana is a researcher and lab assistant in a neuroscience research lab at the University of Michigan.

The attention that their story got online turned into an independent documentary film about love, friendship, strengths, and compassion. The women are currently traveling around the U.S. best movie festivals with the film about their shared kidney “Bean”.

If you are not ready or cannot donate, you can change somebody’s life by simply talking to them and providing the mental support they need; reassuring people with kidney disease that they are not alone on this journey can be vital for their wellbeing.